Skip to content
HomeUncategorizedNew Book of Poems From Bruce McRae

Hyperbole, verging on histrionics. Hectoring lists. Mangled metaphors. Super-similes, which lean toward hysteria: as if ‘like’ and like ‘as if’. A flying fortress of images and imagery. Wordplay. Cinematic mélange. A stand-up comic’s throwaway one-liners. (Yes, humour, of the rubber crutch variety.) This collection’s main theme concerns pushing ‘poetic’ language to extremes and is dedicated to those who don’t read poetry. We venture dangerously close to the edge of a wordy abyss. Forgive yourself.

Like As If is a collection of knotty, often surreal, often hilarious poems churning with imagery and lyric propulsion. At the Porch, we were struck by the chances McRae takes in these poems–he is working from a different set of aesthetic assumptions than most contemporary poets start with, much to our delight.

A River Running Underground
In my mind is a paper mountain.
God shrugged, and that was my mind
separating one water from another water.
My mind imagined other minds.
It manufactured an idle daydream.
It made shadows after dark,
creatures without substance and form,
glass cities, ethereal fogginess,
the most beautiful of all the monsters.

In my mind is a sun weeping light.
Sparks star off an iron spike
while my mind paints jungle flowers,
highways of ice, celestial filaments,
an army of children crying:
“Toys and snowfall at Christmas!”

A vortex of quiescence,
and my mind is resting by a calm lake.
A storm’s fury and human furor
and my mind is wandering in a thick forest.
The universe is a single great thought,
my mind asleep on its downy pillow.

Where nothing, and no one, may wake it. 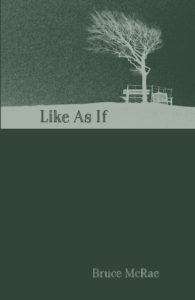